Don’t expect weasel warlords and swooping owls in Ratropolis. The flavour of the past few years has been hordes of undead, walking wights, and other undead zombies. Thanks to Ratropolis, we now have living undead rats swarming our screens. Due to mysterious experiments gone awry, take your pick of genetic dabbling or forbidden sorcery, the once thriving rat civilisation is now under siege from an impressive menagerie of mutant rodent monsters.

Ratropolis is a 2D side scrolling combination of city and deck builder, tower defence real time strategy. Once a thriving rodent civilisation, rats have fallen on hard times, but with the right cards to play, you’ll soon be able to build majestic city halls and towering cathedrals. That is, if the pesky mutated undead thingies swarming from left and right of your monitor relent. There’s a copious amount of clicking on the right icon within a set time limit. Oops, merchant has just left, too bad you were busy repairing city walls… Click on treasure drops, click to send your rat guards scurrying, click on the super urgent message. And when you think your rat civilisation is cruising through the endless waves of foes, Ratropolis dials difficulty up a notch (if not two).

There are few simple and straightforward cards in Ratropolis. Card descriptions are on the obtuse side, so might as well skip the blurb altogether and see what they can actually do. “When deployed… when labour is complete… activate for 120 seconds…” Okay, let me read those lines again to make sense of the card as my village gets trampled to smithereens by howling monstrous obese rodents. By and large, there are resource cards, military cards and building cards. Fortunately, the cute drawing usually gives a better inkling to the card’s mysterious effects than the writing does.

Obviously, if you’ve had your mouthful of the walking dead and other white walkers, you are unlikely to enjoy the sight of undead rats mutating very much. Ratropolis however does a great job at making the undead rats and their living counterparts look rather cute. Colorful splashes of bright paint, judicious lighting and folksy rat heroes make me want to own the physical deck of cards (not that they exist yet?).

The Old Video Gamer’s Prattle: Not enough cheese for stressed out lab rats 6/10

Ratropolis is a fun colourful game if you don’t mind the fast pace. The game starts on full on overdrive plus afterburner mode. Add a dash of roguelite and a dollop of faster pace complex card combinations, and you’ll get a good workout. There’s no old video gamer mode to ease you into the bubbling Jacuzzi, and the deep end of the Ratropolis Ocean does feel a little chilly (there is a beach stage, complete with zombie rat pirates). Ratropolis does justice to the proverbial rat race, but it would benefit from streamlined gameplay, more generous tutorials and improved localisation. Despite its shortcomings, Ratropolis dishes out cards and creativity with generosity, and with a whacky Korean pop flair. More camembert and less clicking please.

If you’re into video games that combine tower defence and deck building, the easily accessible and equally colourful Monster Train provides another creative take on this nascent genre. 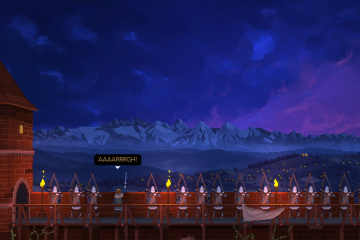 Yes, Your Grace sits you on the familiar throne of a medieval ruler. Armed with a rusty crown and shining coats of arms, will you rule happily ever after?