Hear ye, hear ye, the legend of the Champion of Kirkwall. A lowly Ferelden refugee running from darkspawn, Hawke arrives on the shores of Kirkwall, the City of Chains, a major human settlement in the Free Marches. First a smuggler and a mercenary, Hawke, with the help of merry companions, rises through wits and wiles to save the good people of Kirkwall against impending doom. This epic story which takes place over a decade is yours to play.

Playability: No manual required for adventurers

Dragon Age II is proof that a complex game can be a user friendly accessible experience. This is the role playing game for people who need time to hand wash their automobile on Sunday, for those who want to enjoy a pint with their mates, or to wander the latest exhibition at the local museum, for those who cannot afford fifty or a hundred hours freely roaming an open-ended virtual world of dragons and gnomes. Dragon Age II’s sleek and streamlined interface makes adventuring a pleasure. There is no need to worry about the clutter full inventory and the locations of merchants. The skill tree is crystal clear, although a few more hero classes (beyond warrior, mage, rogue) would have provided variety in play.

Dragon Age II only takes place in the city of Kirkwall and its immediate surroundings. This makes for a tighter more streamlined plot but also occasionally repetitive quests in the same streets, caves and buildings. Once the fighting starts you see your party running amok to perform daft attacks, which makes you quickly realise that they are just robots controlled by your PC. Luckily you can pause the game during combats to plan your party’s next moves or strain your pasta, whatever is more urgent. Political drama never really sounds very exciting, although maybe it should. Once it’s pretty clear who’s in and who’s out, you feel like your hero could just charge head in, instead of tiptoeing around political remonstrations.

The voice acting is Dragon Age II’s strongest suit of armour. The performance is very credible and gives life to the characters, although some of the foreign sounding accents are a tad exaggerated. The rare jerky moves are easily overwhelmed by superb cut scenes. There be dragons, and they be mighty. The beautiful maidens have ample bosoms and are tough enough to knock out your teeth.

Dragon Age II might not have the (oft overwhelming) scope of roam the entire world role playing games, but it does land a few knock out fireballs. The user interface, from inventory, to skills, to maps, to combats sets high standards for adventurer assist. Strong voice acting fleshes out a cast of colourful characters and provide multiple interactions with the player. Dragon Age II is a wholly enjoyable story to hear and a fun game to play. 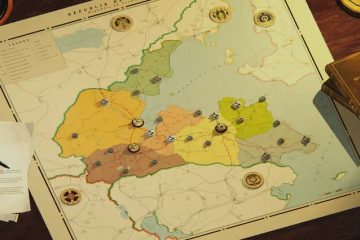 Suzerain is a text based political role-playing game. How will you placate the angry mobs or ingratiate yourself with the oligarchs? Create jobs, repair infrastructure, quell opponents or simply pilfer public coffers, Mr President.