Star Wars: Battlefront is a series of venerable and legendary video games based on the Star Wars film. The original Battlefront was developed in 2004, followed by a sequel in 2005. Both titles were commercially and critically successful and are still popular with gamers. The 2015 reboot confusingly bears the same title and has some mighty storm trooper shoes to fill. Star Wars Battlefront does not have a plot or a specific storyline; the game just uses Star Wars lore. A long time ago in a galaxy far away…

Star Wars Battlefront is as easy and pleasurable to handle as old school arcade machines. One minute you’re shooting away with your heavy blaster, the next you’re in the hot seat of an X-wing, a Tie fighter, an AT-AT walker or a speedbike. Battlefront friendly user interface is ideal for those who never read gaming manuals. First and third person switching, customisable equipment and characters make the spawn-run-shoot-capture-die-repeat experience a joyous if predictable romp.

Annoyance: No campaign, no tall tales

Star Wars strongest point has always been about its stories and its eternal tale of odyssey, of forever kings and of flawed human characters. Star Wars Battlefront does not tell any of these stories. You’re supposed to know them already, you’ve watched the films. It’s almost as if gamers were expected to run the films on a large screen in the back of their living room while playing the game. Battlefront somewhat lacks immersion, compassion and feelings. The game is neat, pretty and shiny, but it does not have a Star Wars epic beating heart.

Battlefront looks like Star Wars and is worthy of the films’ special effects. When the imperial walkers come for you, you’ll be running scared in the snow of Hoth, and you’ll enjoy grim payback time as the mighty missiles of your X-wing starfighter blow up Tie fighters in Tatooine’s canyons. Your favourite Star Wars heroes and villains, legendary battles, mighty machines are all packed in the graphically superior Battlefront package. Luke Skywalker does look like Luke, and so do Han Solo and Princess Leia. Smooth animations, high fidelity soundtrack, droid small talks, laser sputters, and the familiar exotic sceneries on far away planets make Star Wars Battlefront an all you may eat banquet for the eyes and ears.

The Old Video Gamer’s Prattle: Star Wars without a story 7/10

Star Wars Battlefront is a technically polished shooter with beautiful graphics. However, the Star Wars story needs to be told rather than shoved aside as this game does. Because of the lack of a campaign, Battlefront feels like a series of disjointed skirmishes across Star Wars lore. Epic tales of courage, revenge, love, cupidity and sacrifice across the stars are jarringly missing from Battlefront. Although the gameplay is enjoyable, Battlefront quickly feels pointless except for the multiple opportunities to boast about kill statistics. 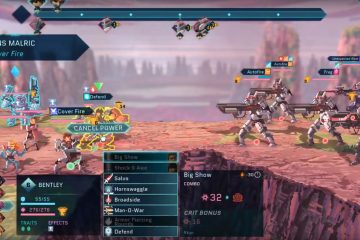 Explosions of pretty colours galore. Star Renegades' pixel art is jam packed with little details here and there. It could almost be used as a “Where is Waldo?” substitute. If Massive Damage published a hardcover book on the art of Star Renegades, I’d be the first one in line.