Wilson wakes up dead on a mysterious island. It’s summer or is it winter? He’s going hungry, he’s going insane. Darkness is coming. There are some strange looking bipedal pigs and some really aggressive giant spiders. He must survive (so he’s not really dead is he?). There’s a berry bush nearby, some flowers, twigs, flint… Don’t Starve is a survival and crafting game. How many days can Wilson carry on?

Playability: You’re on your own

Don’t starve, don’t poison yourself, don’t freeze, don’t get eaten, and don’t expect any form of tutorial. Don’t Starve tests your survival wits and your long forgotten scout badges. Flint, grass and wood lying around. How convenient! Make a torch for the night as darkness bites! Pick up berries and carrots, trap small animals for food. From hunter gatherer, transition to farming and livestock raising. Crafting is easy and rewarding, just a few clicks here and there! All would be well and dandy but there be monsters lurking…

Annoyance: Permanent death without save

The single most aggravating feature of Don’t Starve is the permanent death without any hope of loading a saved game. Progress is saved so you can easily take a pipi break, but should Wilson get eaten by spiders or trampled by beefalos, the saved game is automatically deleted, forcing you to restart from scratch in an entirely different world. Don’t Starve doesn’t leave any space for trial and error. Mistakes are costly and are all the more infuriating as you progress through the game. You’ve discovered fire already, yet you’ll have to collect wood again for the hundredth time! Build your camp painstakingly for the thousandth time! A save game feature would have been appreciated by casual players and old video gamers.

Don’t Starve’s art work is darkish hand drawn reminiscent of Tim Burton’s. All characters, from bees to pigs, are full of personality and strangely wonky animations. There’s hardly any spoken dialogue, but the sound effects and the occasional trumpet blare (as Wilson speaks) combine with the visuals to paint an intriguing if zany backdrop.

Crafting tools, clothes and whole farmsteads is easy and intuitive in Don’t Starve. However, slight mistakes are harshly punished by permanent death without saved game. As the game progresses, you’ll be less and less inclined to take risks, to discover and to experiment, lest you should restart from the beginning. Trial and learning is only possible if you are willing to repeat the same tedious tasks over and over. 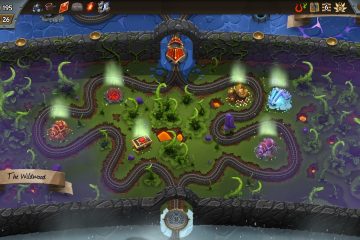 Monster Train offers dollops of deck building, card battling and turn based pyre defence with a pinch of rogue like. Draw some cards from a menagerie of over 200, upgrade your champions and chugga chugga choo choo through the campaign story.